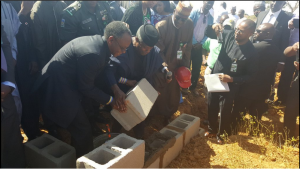 This is just as he described Governor Nasir el-Rufai as a true reflection of the change mantra who is committed to delivering on campaign promises of affecting positively the citizens of the state and indeed making Kaduna State great again.

“I am so proud of Mal. Nasir el-Rufai because he represents change and I am sure under his leadership, Kaduna State will be great again, he is a man of his words.”

Professor Osinbajo addressing the enthusiastic Kaduna citizens who gathered at the venue of the official ground breaking ceremony of the Galaxy Mall and Galleria at the Galaxy Amusement Park, expressed confidence that Nigeria can be great if we stop corruption in the system.

He reiterated the commitment of the present administration under President Muhammadu Buhari to fight corruption to its roots and ensure that all looted funds are returned and perpetrators persecuted accordingly.

“The government is serious about ending corruption, and Nigeria can be great if we stop corruption, the government will stop at nothing to ensure that stolen monies are returned and looters brought to book.

“The country has the resources for all to live reasonably a decent life and we owe our country with the opportunity to do well, the whole country is waiting for the promised change and by the grace of God we will deliver,” he stated.

In his address, Governor el-Rufai said the Galaxy Mall and Galleria project is intended to improve the shopping experience for Kaduna residents, expand the options for quality recreation and create jobs during its construction as well as in the shops and eateries that will occupy the premises. “Shoprite and Silverbird are proposed to be the proposed anchor tenants of the property,” he added.

He further stated that “the mall will raise the game in retail, provide cinemas for the people and promote linkages with farmers and suppliers. That is the manner in which the malls that retail giants occupy tend to become centres of much tangible and intangible economic activity.